Kristen Stewart Hops to It in Chanel’s Spring Campaign

Earlier on we posted a preview of Kristen on the cover of France magazine, ‘Obsession’. Today, digital scans are finally available on the web thanks to kstewartfans LJ for them. Below is the translated interview from the magazine. Read more undercut and enjoy! 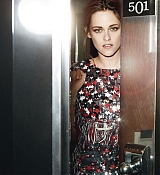 “I’M NOT CRAZY, I AM ONLY” Kristen Stewart

A tornado cuts through the air. A tornado that looks like a little girl of 24 years in white dress Chanel. Behind her, three press officers shall ensure that Kristen Stewart has it all, she has her coffee latte in time, she finds her way to run five interviews with fifteen minutes carefully wedged two days before. She arrived yesterday in Cannes by private jet. Only way to extricate trentesix hours of filming in New Orleans a film action, American Ultra, leaving his knees and elbows in blood. Ures of érafl she shows off with pride fi “Now no one can write that I do not work hard! ”

Kristen Stewart has no time to waste. It’s been six years since the release in 2008 of the first Twilight, it runs faster than the planet rotates, speaks as if she had to take a jet, stops only to mimic a scene grand gestures before engage in a response that travels far and his reasoning. For when she speaks, Kristen Stewart makes her way with machetes parmises doubts. “I liked Sils Maria. I loved making this film and I loved the view. You know why? I love films about cinema. Maybe because I do not know how others are doing. Some know. I do not know. I do not even know if I look at it as an actress who would look in the mirror. I just know I like the way Juliette Binoche and Olivier Assayas based on our utterly ridiculous to us nature actresses. It amused me very much. It amused me with force. ”

It takes a patient to consider insurance as Bergmanian of Assayas film in terms of stuffing soaked ferocity. But it was his shot early genius, the beginning of a quarter of an hour chrono bullfighting dialectic of a girl who always takes the issue parson most unexpected angle, just to keep one step ahead. This morning, his irony is princely. “I do not mean it is not … important that trade. But I do not believe it’s so important that trade. But think again: I am very happy to be mounted in the car. I
could almost die … for that. ”

“I JUST WANTED TO BE ACTRESS BUT TODAY THE CELEBRITY IS CONSIDERED MORE SEXY THING THAT HAPPINESS. ”

Lesson one: give herself entirely to the movies does not stop to laugh. This is called zigzag. And Sils Maria, film entirely in accordance with the intelligence of his actresses, the film refuses to lock them up in pious or cretinous images, does nothing other than to survey the zigzag one. In this feature film presented at Cannes, Kristen Stewart is Valentine’s assistant Maria Enders, a great actress played by Juliette Binoche, who finds himself in Sils-Maria, center Nietzschean (this is where the philosopher was enlightenment of the Lord return) to repeat a piece of Wilhelm Melchior she played twenty years ago. But time has passed and she must agree to endorse this time the role of the mature woman. Valentine, the top of its 25 years, serves as a coach and occupies the place that was once that of Maria. Of course, Maloja Snake, the part of Melchior, also speaks of nothing else: the irrepressible cruel rivalry between youth and old age enemy.

This mirror game between life and art take on an extra layer when Maria learns that the role of the young girl was eventually entrusted to an actress came é films sci-fi ction (Chloë Grace Moretz, the Kick-Ass actress), a fi lle best known for her boyfriends chained, his blood alcohol level while driving and erratic interviews. Either the media idea, so ready-made, which is Kristen Stewart. “It made ​​me nervous, the idea that one makes a direct comparison between Chloe and me. In the film, she is not me. However, yes, I am speaking directly to her. I look at her with all my knowledge about celebrity. I can judge it, defend it, take it in derision, and even be complacent with it … ”

Assayas has felt that the time had come to confi er Kristen Stewart the role of an army daughter as a person to understand the era in all its paradoxes. That the time had come to move its image slightly. In Sils Maria, Kristen wears glasses, long hair fi tired she hides under a hood terrain and a deformed black T-shirt. It reminds Virginia Despentes Even immediate presence, even critical power. No doubt they also share this brandished right loud and affi rm things – starting with his doubts. Above all, it announces the arrival of a generation that pretends to be afraid of anything as long attacked everywhere. Kristen is the emblem. That is to say anything but she loves her time.

“People think I’m barge, sorry, I’m not. It is their ERCEPTION my strength against them, but I am very calm about it. Perhaps because there is just a long time that I no longer seek the understanding of others. How would it be possible when those who come to me have only read mostly fake stuff on me? I’m not crazy, I’m alone. This is the reality of this business. ”

Custom dictates that the actress who engages in this kind of lament take laying drama queen of use, taking care to spare heavy silences. It not. She did not finish. She asks you to follow her to the end of his argument: “People talk to me like something, OK, this thing, I have nourished and manipulated. This is the job that does it – this damn job that never stops. Some go to work and then returned home. We do not. There are no boundaries: they melt. There is no privacy. Mine, I gave up. ”

It fixed his hands, who do fi ne more scratching her thighs. There are two minutes, she seemed indestructible. There anymore. “Everything is public, relayed connected. And I can not say I totally do not care. I only have to decide if it devastates me or not. And I decided that this was not going to celebrity fuck me up. Otherwise, I’d be crazy. Mad About googliser my name and see spread everywhere, millions of entries, my love stories, my failures, my mistakes. I have no choice other than survival. ”

There are six, Warrior Kristen celebrated her 18th birthday and was waiting impatiently stamping out the first episode of Twilight, where she shared the bill with one that slowly was becoming her boyfriend: actor Robert Pattinson. In five episodes, Twilight brutally Pattinson and Kristen made ​​more famous than the Pope and the Beatles together, and kept us informed of all the rumors about their history until it self-destructs in 2012.

Whenever Kristen runs a shovel to a guy (or a girl), experience in the moment even more important than Syria or unemployment. “I think Robert and I, or Justin Bieber, have wiped the plaster of a new type of overexposure. Maybe it has never been so far before us. The speed at which rumors were spreading … Unimaginable. I developed from a persistent hatred towards technology. ”

Being the creature of a tool and not liking it. Handling a bulb that both enlighten you and burns you. Duty while you feed the monster and kill you. “We, we just wanted to be actors, but the success came at a moment in history where fame is considered a sexier and more desirable than the happiness thing. That’s what made ​​the bizarre things. No one accepts you doubt one second of fame: “Hey, we took you there, it is we who have made ​​you famous, so now give us what we ask of you.” This sense of have been chosen by them and having sacrificed myself for them first occupied a lot of my thoughts for too long. ”

Everything we have read the last four decades on the paranoia of Philip K. Dick in Bret Easton Ellis, is nothing compared to what was experienced this daughter: paranoia 2.0. Who decides to work with Assayas because we do not ask him and, turning, marveling that a filmmaker offers him fi nally to imagine his character. “I come from a school where the actor does not need to have imagination! “Ultimately, no wonder that there appears an acute intelligence. Bluffing everyone. “It seems that since Sils Maria, I move, I’m talking about! Planetary scoop! “She never gives up. That is good.

Just to continue this game of masks between reality and fi ction we offer it to the photo shoot with Peverelli Benedict, who plays the photographer in the film Assayas. They know, invent any speed. We watch them play when suddenly she turns around and asks forgiveness “for nervousness. I should not say this, but there ten minutes, coming here, I learned that I was in the short list of actresses chosen for the Best Actor. I can show off as much as I want, but it’s Cannes, I have another movie and then suddenly, I do not know where I live. People think I’m crazy, but nothing is more important to me than playing. ”

Julianne Moore has finally won. We can not completely blame the
jurors if Kristen Stewart scary part is primarily because it embodies a generation use to which it is not yet forgiven for having already reason.

Kristen Stewart Relaxes at the Park in Los...

Kristen Stewart Gives a Rare Glimpse into the...

Kristen Stewart Hops to It in Chanel’s Spring...

Kristen Stewart is seen at LAX airport in...

This website uses cookies to improve your experience. We'll assume you're ok with this, but you can opt-out if you wish. Accept Read More